You are here: Home

On the eve of our nation’s celebration of liberty for all, a federal court has ruled that not only can women not celebrate being equal, they do not even have the right to fight for their equal rights in court!

A three judge panel of the First Circuit Court of Appeals said on June 29, 2021 that women’s organizations and women individually or as a group do not have the right to invoke the jurisdiction of the court to hear our case seeking a Court Order to force the U.S. Archivist to publish the Equal Rights Amendment, the “ERA.”

We will seek further review of this outrageous decision by the full First Circuit Court of Appeals. How can any court rule that women as a class have no standing to even SPEAK in court when the government unlawfully blocks women from achieving equal protection of the law — even after the ERA was ratified by the necessary 38 states on January 27, 2020?

Over 46 million women voted for President Biden and Vice President Harris, in part because they explicitly stated during their campaign that they support the ERA being published in the Constitution!

Yet, for five months, President Biden has allowed his Department of Justice to continue to fight against the ERA, using the Bill Barr / Trump playbook, in this federal case and in the other one brought by the last three states to ratify the ERA:  Arizona, Illinois and Virginia.  These states have their case on appeal in the D.C. Court of Appeals, after also being told they didn’t have standing to force the Archivist to publish the ERA!

So, Equal Means Equal has been protesting as ERA Sentinels outside of the Department of Justice in Washington, D.C. for several weeks. We need many more women to join us in this visible protest!  If you cannot make the trip yourself, you can donate to give unemployed women part-time work to help organize and join in the protest.

They are all together, with one voice, holding signs and chanting outside the DOJ, “What do we want? ERA! When do we want it? Yesterday!”

This piece from Equal Means Equal goes on, but click above to see more.

NFBPWC-NYC is proud to share our newly elected International representatives for 2021-2024: 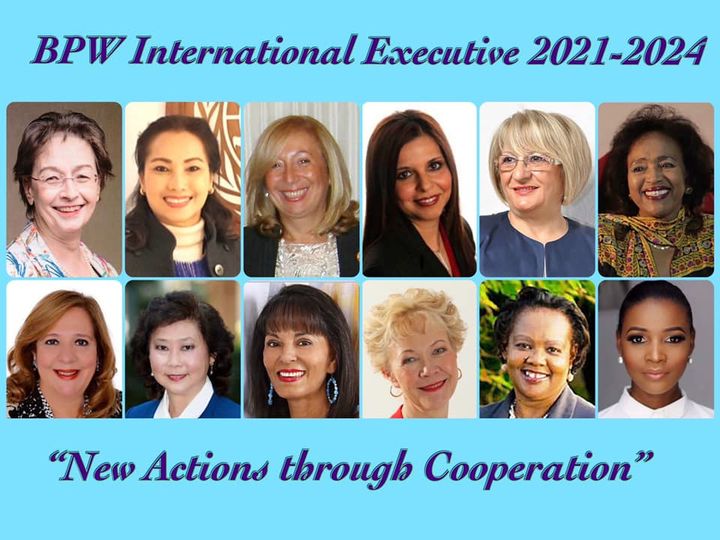 Congratulations to the newly elected Standing Committee Chairs of BPW International for 2021-2024:

Uniting and Advocating for Women

The National Federation of Business and Professional Women’s Clubs, develops the professional, business and leadership potential of women. For over a 100 years, we have worked to empower women. We ally through education, advocacy, mentoring, networking, skill building and economic empowerment programs and projects.

Our network exists in 110 countries over 5 continents through the national network NFBPWC-USA and the International Federation BPW International. The importance of our work is reflected in the fact that we hold a consultative role in the United Nations on various women issues. We attend the yearly Commission on the Status of Women (CSW) at a UN Delegate level.