Please join the NFBPWC-NYC Chapter on October 17th for a great night of live theater to attend the performance of the award winning new musical comedy Desperate Measures. Special pricing of $55 per ticket (normally $89) has been arranged for our group by producer Pat Addiss, and if we have 20 or more attendees, we will be able to have a meet and greet with the cast.

In order to secure this special pricing, we need to have a final count by Sept. 26th.

NFBPWC-NYC members and non-members are both welcome.

We hope you will join us!

When the dangerously handsome Johnny Blood’s life is on the line over a saloon brawl, he must put his fate into the hands of a colorful cast of characters including a mysterious sheriff, an eccentric priest, a sleazy governor, a saloon girl gone good and a nun out of the habit. Together, they face uncharted territory as laws are broken and hearts are won. Will they pull off the greatest caper yet, or will Johnny be left hanging? One thing is certain…you will come out smiling!

SEE WHY CRITICS HAVE BRANDED

DESPERATE MEASURES A GRADE ‘A’ MUSICAL!

“A DELIGHT…SUCH A HOOT! WONDERFUL!”

“I LAUGHED UNTIL I CRIED! I PROMISE YOU WILL

LOVE THIS HILARIOUS AND CLEVER MUSICAL.”

“SEE IT BEFORE TICKETS BECOME SCARCE!

“BETTER THAN SHAKESPEARE! The funniest, most-tuneful, non-stop, slam-bang BEST MUSICAL of the season!”

“A production of infinite jest and most excellent fancy, delicious buffoonery with infectious glee” 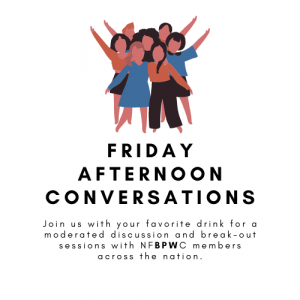 NFBPWC members and guests are invited to join us in our weekly Friday Afternoon Conversations as we endeavor to deepen our connections. When:  Every Friday Time: 4:30PM Pacific, 5:30PM Mountain, 6:30PM Central, 7:30PM Eastern Where:[...]
View Calendar
Add