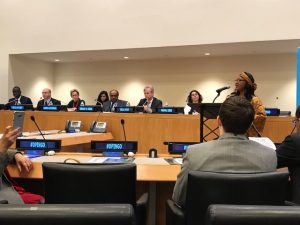 Today’s briefing highlighted the positive aspects of migration both for the host countries as well as for the countries from which the migrants come. The panel was composed of United Nations experts, and partners from NGOs working with migrants, as well as some living the migrant reality.

Ashraf El Nour, Director of the International Organization for Migration (IOM)’s office to the United Nations in NY, moderated the session. In addition, he leads IOM New York policy development work in the Global Compact on Safe, Orderly, and Regular Migration. I found “Regular” to be an odd word choice, but now realize that it differentiates those migrants that arrive in a host country illegally or overstay tourist visas, etc., and thus are “Irregular” migrants. Regular migrants are registered in a host country and have access to legal employment, better wages, legal protections, more social services, and are less vulnerable to the abuses that migrant workers may suffer.

In 2017 the number of international migrants worldwide was nearly 258 million. About 3.4% of the world population are international migrants (this compares to 2.8% in 2000). Given global trends that can necessitate people movement: war and family safety, climate change, natural disasters, economic factors, the trend will continue to increase …and this is a good thing. Migrant workers contribute over $6 trillion to global GDP. They contribute to economic growth, development and innovation, combat the negative economic effects of aging populations in some host countries, enrich society with new foods, music and cultural aspects. And the remittances sent home by migrant workers, over $413 billion in 2016, can enable families and villages to survive and improve living standards.

As John Kenneth Galbraith has said:

“Migration is the oldest action against poverty. It is good for the country to which they go; it helps break the equilibrium of poverty in the country from which they come…What is the perversity in the human soul that causes people to resist so obvious a good?”

Maria del Carmen Dominguez, Deputy Permanent Representative at the Permanent Mission of Chile to the UN spoke about Chile’s experience and policies. The birth rate in Chile is 1.9 children per woman – thus the population is now aging and Chile needs migrant workers. Most migrants in Chile are from other Latin American countries and the Caribbean. The unskilled migrants can fill jobs in agriculture, logging, and other industries that are important exports for Chile. Many unskilled migrants are quick to become more skilled workers when given the training and education. Chile has both “Regular” and “Irregular” migrants and it has a process to make the “Irregulars” “Regular”.

Chile also has a program to give visas to migrant families so that the family can be united. Migrant families tend to be entrepreneurial and a stabilizing force in society. It was clear that Chile is a strong supporter of the United Nation’s Global Compact on Safe, Orderly, and Regular Migration and believes that Human Rights are for all Humans – irregardless of their immigration status. The steps that Chile is taking seem very enlightened when compared to walls, border patrols, breaking up productive families and deporting Dreamers…

Bela Hovy, Chief of the Migration Section at the United Nations Department of Economic and Social Affairs, overseas the estimation of global migration trends and supports migration data collection and analysis in developing countries. From 1993 to 2005, Mr. Hovy was responsible for statistics at the Office of the UN High Commission for Refugees (UNHCR) in Geneva. And statistics he did provide – on levels and trends in international migration, demographic characteristics, migrant remittances and more. In many parts of the world, migration occurs primarily between countries within the same region: most international migrants in Asia (80%), Africa (79%), Latin America and the Caribbean (64%), and Europe (53%) originate from another country in the same region. By contrast most international migrants living in Northern America (98%) and Oceania (87%) were born in a region other than the one they are residing in. The ratification of legal instruments related to international migration is uneven.   The 1951 Refuge Convention and its 1967 Protocol have been ratified by 145 and 146 UN Member states, respectively. But only a quarter of countries have ratified the 1990 International Convention on the Protection of the Rights of Migrant Workers and Members of their Families.

Kevin Appleby is Senior Director for International Migration Policy for the Center for Migration Studies of New York and the Scalabrini International Migration Network (SIMN). SIMN is a network of 270 schools, shelters, educational institutes and training and community centers for migrants operated globally by the Missionaries of St. Charles, Scalabrini, Catholic religious order.   He focused on the importance of a regularization program to legal status. He also mentioned studies that show if 11 million undocumented workers were regularized, it would increase the real GDP in the USA by 3.3% over 10 years.

Manal Kahi is the founder and CEO of Eat Offbeat, a social enterprise that delivers authentic meals made by refugees to clients (mainly corporate). Manal came to the USA to pursue a career in international affairs, but found the hummus available in NYC led her to launch Eat Offbeat. The enterprise both helps New Yorkers to discover authentic dishes from around the world and also creates quality jobs for immigrants.

Manyang Reath Keer spent almost 14 years of his childhood as a Lost Boy of Sudan before he was brought to the USA by a faith based NGO. For the past 10 years, in addition to getting an education, he has dedicated his life to raising awareness and money for the refugee crisis through his non-profit, Humanity Helping Sudan and most recently he launched a coffee Brand, 734, named for the geographical coordinates for Gambela, a region in Ethiopia where over 200,000 South Sudanese citizens take refuge. Precedes support farming enterprises in the region and allow refugees to live a more meaningful and aid-free life.